by Robert Daines
in Politics
0

There are no immediate safety concerns and the Zaporizhzhia Nuclear Power Plant is being powered through a restored electricity line, Ukraine’s state-owned nuclear operator Energoatom said. Transmission lines from the plant have also been repaired, while work is underway to reconnect two units to the country’s grid, it said.

Zelenskiy cited the disruption, which he blamed on Russian shelling, to drive home his demand for President Vladimir Putin to withdraw his forces from the complex and for international inspectors to investigate.

“I want to assure all Ukrainians: We are doing everything to prevent an emergency scenario,” Zelenskiy said in his nightly video address to the nation. “It depends not only on our state. The key thing is that international pressure is needed to force the occupiers to immediately withdraw.”

The atomic plant in Zaporizhzhia was captured in March when Russian troops swept through southern Ukraine and has become one of the most sensitive pressure points of Russia’s occupation. The Ukrainian leader said he addressed the issue with US President Joe Biden in a phone call on Thursday. 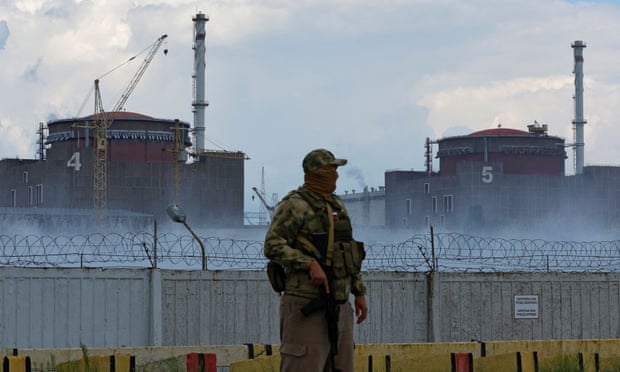 European intelligence officials say the Kremlin is exploiting its control of the plant to shield forces from Ukrainian counterattack while it launches artillery assaults from nearby. Russia accuses Kyiv of shelling that has targeted the facility and warned of unsubstantiated false-flag operations, which European intelligence services say are disinformation.

Nuclear inspectors from the United Nation’s nuclear watchdog, the International Atomic Energy Agency, are expected to visit the plant in the coming days. Officials will be given wider powers — including over security and safety issues—than the IAEA had initially sought, according to diplomats familiar with plans for the visit.

IAEA Director General Rafael Mariano Grossi met Wednesday in Istanbul with officials from Russia’s state-owned nuclear operator Rosatom Corp. to hammer out details of the mission, which will depart from Kyiv and enter Russian-held territory around the city of Energodar near the nuclear station.

Nuclear power plants operate with multiple layers of safety systems. Zaporizhzhia has several high-voltage cables connecting the station to Ukraine’s electricity grid. A large substation at the complex can also convert power generated from the plant into electricity used for cooling systems. The last line of defense are diesel generators that can be used to prevent a meltdown.

What is a TikTok Scraper?

The GOP is now acting like a party in search of itself with less than three months before US elections...